Considered the « mother of all grains » by the Incas, quinoa remains one of the best foods for those who wish to maintain a healthy diet and rich in essential nutrients.

So much so that nowadays quinoa has gained super food status.

But to enjoy all that this grain has to offer, it is essential to know how to cook quinoa correctly.

And of course we explain all of this to you here. Come check it out!

Did you know that quinoa is such a complete food from the nutritional point of view, but so complete that it is second only to breast milk?

Yeah! Quinoa is the most nutritious food in the vegetable kingdom and has a much higher quality than other foods in the animal kingdom, such as meat, eggs and milk

That’s because quinoa has 23% of proteins, of which ten are considered essential amino acids (that is, they are not produced by our body).

Precisely for this reason, quinoa ended up becoming very popular with fans of vegetarian and vegan diets, being considered better than soy to replace meat.

The grain is still rich in minerals, such as iron, zinc, magnesium, phosphorus, copper, folic acid, in addition to B vitamins.

Quinoa does not contain gluten, so it is also released for celiacs. Another interesting feature of this grain is the presence of phytoestrogens, a type of hormone of plant origin and, according to scientific research, is important to control and prevent problems such as osteoporosis, breast cancer and hormonal changes common in menopause. 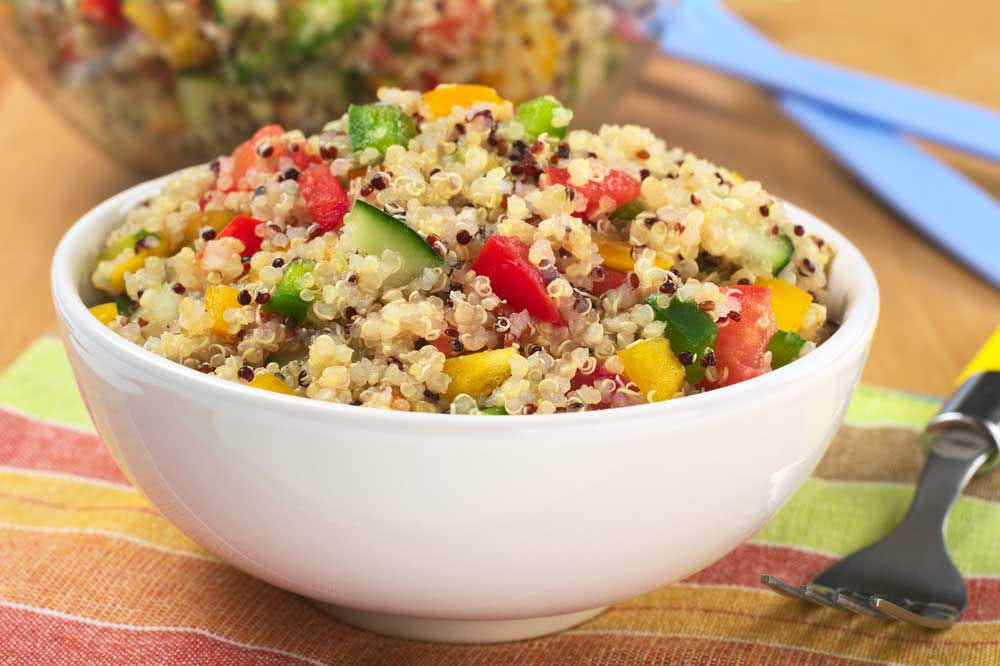 Quinoa is a food of Andean origin, coming from countries like Bolivia, Peru and Colombia. It is estimated that the grain has been cultivated for more than five thousand years in the region.

For this reason, a large part of all quinoa consumed comes from the Andes, although there is already cultivation of quinoa in other parts of the globe, including Brazil.

However, it is there in the Andean lands that the grain grows best and ends up having a higher nutritional value, thanks to the region’s climate.

There are three different types of quinoa produced in the world, whether in the Andes, in Brazil, anywhere. They are: white (most common), red and black.

White has a milder flavor, while the others have a strong and intense flavor.

And, finally, a curiosity: despite being popularly known as a cereal, quinoa is more like legumes (due to the high concentration of proteins) than a grain or cereal. That is why it ends up being considered a “pseudocereal”.

How to cook quinoa 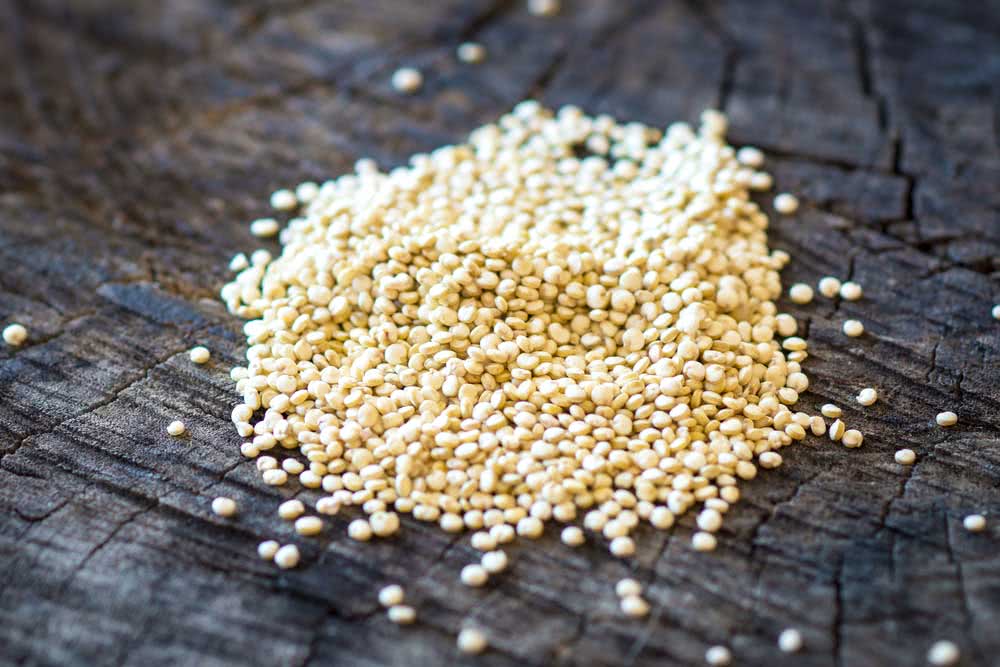 Quinoa is a very easy grain to cook, but it requires a little care to stay on the right spot and not lose nutrients, regardless of the method chosen for cooking.

The first is the need to wash the raw quinoa grains very well to remove the natural bitterness from the food. To do this, simply place the quinoa in a fine sieve and wash it under running tap water.

Remembering that it is not necessary to soak the quinoa before cooking, ok? Just wash it.

Another important aspect is to use hot water and not cold water when cooking quinoa. Before placing it in the pot, leave the hot water prepared next to it.

Use two measures of water for each measure of quinoa. Do not overdo the amount of water to make the quinoa sticky.

Cooking time is also important. No forgetting the quinoa on the fire. On average, fifteen minutes is enough. To be sure of the point, observe the color of the grain. The cooked quinoa needs to create an almost translucent white line around the grain.

Check now the step by step for each cooking method:

How to cook quinoa in the common pan

Wash and drain the quinoa well. Then add it to a pan of hot water. Put on the fire with a pinch of salt and cook for about fifteen minutes. Observe the color of the grain and turn it off when it is on point. Drain the remaining cooking water and let it rest in the pan for another fifteen minutes before consuming.

How to cook quinoa in the electric pan

The method of preparing quinoa in the electric pan is very similar to that of the ordinary pan. Start by washing and draining the quinoa. Turn on the electric pan and add the beans. Complete with hot water. Count fifteen minutes or program your pot. Turn off and wait a few minutes before consuming.

How to cook quinoa in the microwave

Cover and microwave in high power for approximately six minutes. Half the time, pause the device and stir the quinoa. Go back to cooking and check the point. Turn off and wait a few minutes before consuming.

How to use quinoa 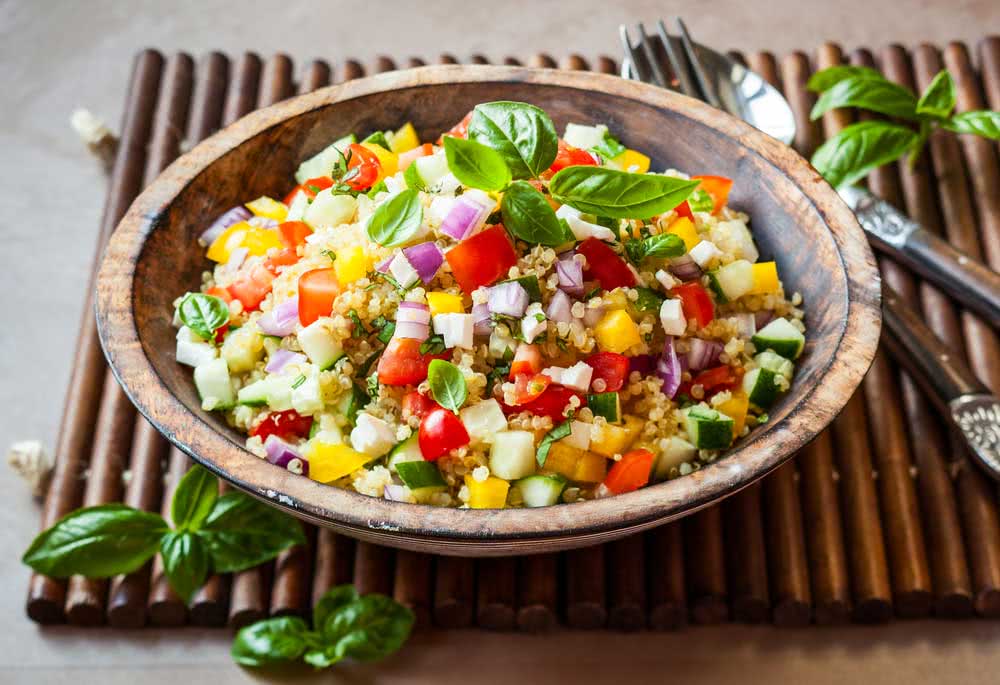 Quinoa can be consumed in different ways (raw, cooked, in flakes, flour), both in sweet and savory dishes, since the food has a neutral flavor and is easily incorporated into other ingredients.

Check out some ideas for using quinoa on a daily basis and making your diet more balanced and nutritious:

Cooked quinoa can be used to enrich green salads. To do this, just add the beans together with the leaves and season with olive oil and herbs.

Another type of very tasty salad using quinoa is the Arabian tabbouleh. The original recipe takes wheat, but you can substitute it without losing any flavor.

Quinoa can also be incorporated into vitamins, yogurts and juices. For this, prefer to use the flaked quinoa.

Try adding a little bit of cooked quinoa over your breakfast fruit. It is tasty and much more nutritious.

That broth or soup at the end of the night can get even better with the quinoa. You can use either the flaked version or the cooked version. If you prefer to camouflage the grain, just beat it in a blender, so that the quinoa is incorporated into the other ingredients.

In place of rice

Quinoa is an excellent alternative to everyday white rice. The grain can be cooked and seasoned in the same way as rice. The rest you already know: complete with whatever you want, it can be the classic beans or with sautéed vegetables and a nice green salad.

Quinoa flour can replace wheat flour in traditional recipes for cakes, breads and pies. In addition to being more nutritious than wheat, quinoa is still gluten free and has a low glycemic index.

But before making the substitution it is important to pay attention to the equivalent measures and the other ingredients that will be used in the recipe so that it does not lose the usual flavor and texture.