How many cell phones have you had in your life? And televisions? Computers? Batteries, cables and batteries, do you have any idea?

Even if you do not know the exact answer to that question, one thing is certain: all this electronic waste that you have discarded over the years still exists somewhere on the planet, after all, there is no “throw it away”.

It is estimated that approximately 53 million tons of electronic waste are generated each year, about 7 kg of waste per inhabitant of the planet, according to the report’s data. Global E-Waste Monitor 2020“, Of the World Alliance for the Statistical Control of Electronic Waste.

And where does all this go? This is the great challenge of the modern world.

Society, together with governments and companies, urgently need to create a sense of common responsibility regarding the disposal of electronic waste or else it is very likely that we will soon be living in the same gloomy world as Wall-E.

So let’s assume that responsibility and promote the proper disposal of electronic waste?

What is junk e-mail? 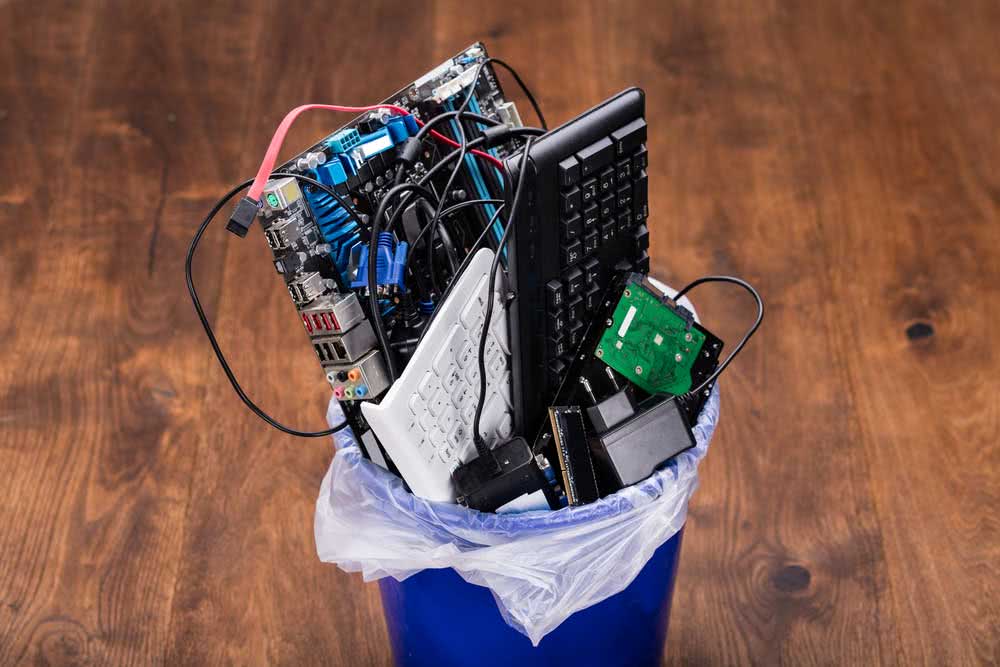 In a simple and objective way: electronic waste, also known as Waste Electrical and Electronic Equipment (WEEE), is everything you can turn on and off, either in one click or in a button. Everything that is connected to the mains or powered by batteries.

Therefore, all types of personal, household and commercial use devices fit into this group, as is the case with cell phones, computers, TV, stove, refrigerator, microwave, etc., etc., etc.

The parts and accessories of these devices are also considered as electronic waste, as wires, housings, cables, antennas and so on.

Electronic waste, like common waste, is divided into groups to facilitate the recycling process. The classification also follows a pattern of colors, note there:

The electronics of the green line are:

In the brown line are electronic devices such as:

The blue line refers to all types of portable home appliances such as:

The white line, one of the most well-known, does not only concern the color of electronic devices, but also their classification as garbage. This list includes large domestic appliances such as:

This classification is important in order to help select and separate electronic waste correctly, sending it to the most suitable place for recycling and reuse.

What is the problem with electronic waste?

Many. The first is the potential for toxicity and pollution, putting the biodiversity of animals and plants at risk, in addition to human health itself.

This is because many of these devices have dangerous chemical components in the composition of the parts, such as lead and aluminum.

Another major problem with electronic waste is that it takes hundreds of thousands of years to decompose in nature.

As a result, all the electronic waste produced in the world serves only one thing: to create gigantic mountains of waste.

The saddest part of this story is that a large part of this electronic waste ends up in poor countries, since rich countries just want to « throw away » everything that no longer serves.

According to data from Basel Action Network, a North American institution that works to end the export of electronic waste, poor countries in Southeast Asia, such as Malaysia and the Philippines, and Africa, such as Ghana, have become a big “backyard”, receiving huge loads of electronic components that they pile up in monumental piles without any care or management, handling or recycling policy, exposing the environment and the lives of thousands of people to the risk of contamination.

Do you think it’s over? Not yet! The problem of electronic waste is much greater than imagined.

All equipment generates damage to the environment to be produced. In addition to the consumption of natural resources, such as water, for example, these devices require the extraction of ores (something super harmful to the environment), the consumption of electricity, not to mention the entire logistics system involved in production, which in itself already contributes to the pollution of the planet.

When recycling does not take place, these resources need to be extracted and used again, causing even more damage, pollution and environmental wear and tear. However, with recycling many parts and components can be reused, returning to the production cycle and, consequently, avoiding the waste of extremely important natural resources.

Electronic waste in Brazil and in the world 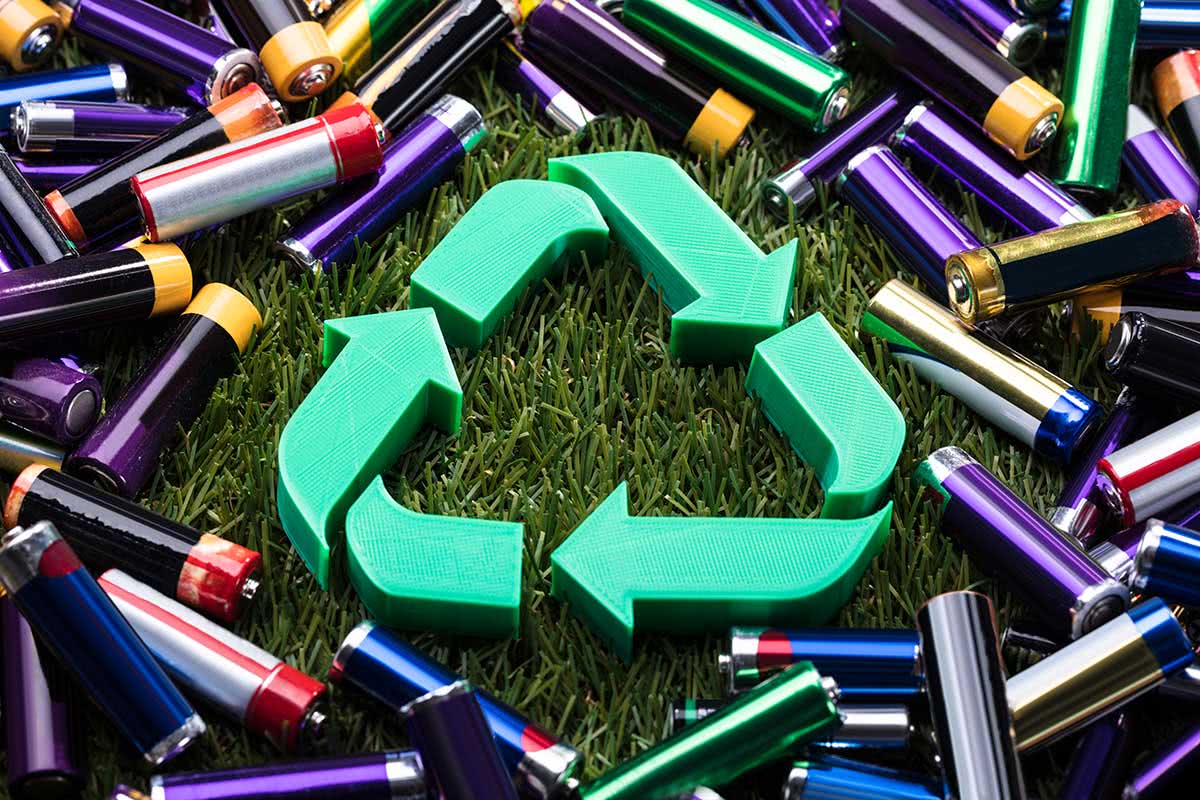 Third is India. There, 3.5 million tons are discarded annually.

But what really surprises is Japan. The small Asian country produces a huge amount of waste when compared proportionally to other countries. There are about 2.5 million tons every year, or approximately 50 kilos of electronic waste per inhabitant.

And what do we do around here? Brazil is moving at a turbulent pace on this issue.

Only in 2010 did the country see a law that dealt exclusively with the issue. Known as the National Solid Waste Policy (PNRS), the law provides, among other things, for the proper management of waste and tailings, as well as the reduction of these materials.

But one of the most important points of the law is the reverse logistics policy, something that involves the public, private sector and civil society.

Reverse logistics is nothing more than the commitment and responsibility that manufacturing and importing companies have on the waste generated.

However, they are not alone in this. For the law to fulfill its objective, it is essential that civil society is engaged in the issue. Like? Properly disposing of your electronic waste.

In theory it works like this: the public sector, based on the law, inspects companies so that they offer the consumer disposal points for electronic waste.

The consumer, in turn, committed and aware of his responsibility, discards electronic waste in the correct place, made available by the company.

And at that point, the consumer has great power at hand: he can simply refuse to buy from companies that do not have a serious and sustainable waste management policy. This simple attitude ends up forcing companies to adhere to sustainable and responsible actions.

Another way to contribute to the sustainable consumption of electronic devices is to look for those of better quality and that consequently tend to have a longer useful life.

Where and how to dispose of electronic waste

The first step to properly disposing of electronic waste is to separate the waste.

Also check if the device works fully, partially or if it has actually exhausted its entire life.

If it still works, consider donating it to someone in need or to a charity.

Personal use devices, such as computers, cell phones and memory card-type components, must be formatted before going for donation or disposal, thus ensuring that your data will not be breached.

After everything is separated, you need to look for the appropriate collection points for each type of waste.

Nowadays, especially in big cities, it is possible to find disposal points even in supermarkets.

Cellular devices and their components, such as batteries, for example, can usually be disposed of at brand stores or telephone companies.

Large electronics, such as refrigerators and stoves, usually end up being taken to authorized technical assistance networks, where they are later sent to the correct destination.

But when in doubt, always look for information with the company’s SAC or on the website.

Avoid donating electronic equipment to waste pickers or recycling companies that do not work specifically with this type of material, since the final destination may end up being inadequate.

With awareness and responsibility it is possible to reconcile technology and environment, think about it!

Now all you have to do is open your email and confirm your subscription! Thanks.